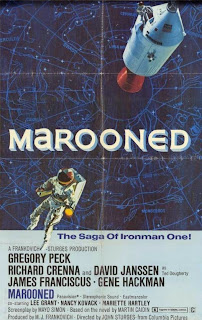 When I was a kid I saw a movie on TV called "Marooned." In it, James Franciscus, Gene Hackman and Richard Crenna play astronauts whose mission goes horrible wrong and strands them in space. NASA works on the problem of rescue before their oxygen is gone, but this isn't exactly like sending a boat out into the lake (or even the ocean) to rescue some sailors.

One scene that stayed with me has Richard Crenna's character going out to make repairs only to accidentally rip his space suit. Leaking oxygen, he floats off into the black recess of space where he will eventually die, his body floating forever. I cannot fathom the helpless of such a situation. Even those sailors stranded at sea have some shred of hope that a ship will pass by or a plane fly overhead or they'll drift to land.

I was left with a very similar feeling while reading The Martian by Andy Weir. Well, perhaps I shouldn't state "reading" but rather "listening" since I experienced the tale by listening to the book on CD expertly read by R.C. Bray. I was completely engrossed in the story. Which is funny since it contains the sort of minutia that the tale of a man stranded on Mars would have to have (well now that decades of probes to Mars has given us a clue as to what being stranded on Mars would actually be like) but which might make a plot drag. In this case, it didn't.

Mark Watney is a botanist on a six member expedition to Mars. A massive dust storm forces the team to evacuate the landing site, but on the way to the ship Whatney is hit by debris. Unable to detect life signs from the computer in Watney's suit, the team believes him to be dead and must leave the site immediately or be trapped themselves.

But Watney is not dead. He awakens later, completely alone on a planet hostile to our sort of life. He makes it back to the habitat where he can take off his suit and assess his situation which is pretty dire. He's been left on a planet that offers no food, no water, no oxygen or even a livable environment and even if a rescue mission was launched, it could take months to get to him. His only slight hope is to wait it out until the next mission arrives--four years later.

He does have some things working in his favor. When the crew left they left the supplies that were supposed to hold six people for a specified amount of time. Not enough to last one person for four years but enough to at least give him time to think.

And it's as Mark enters survival mode that we're introduced to the minutia of what that survival would entail. There is a lot of calculating that goes on mainly because he's going to need to ration his supplies to buy himself as much time as possible. Food, for example. Watney decides to grow food to extend the prepackaged food supply. He decides upon potatoes (since the crew were left several potatoes to enjoy as a Thanksgiving feast) because, as he explains, he can supplement lower ratios of nutrients with vitamins, but he will still need to meet a certain caloric level and "taters" (as he refers to them) will give him a the necessary calories to still be able to function. How do you grow potatoes with dead Martian soil? You enliven it with microbes? How do you obtain said microbes? Well, it isn't pretty (it involves human waste), but Watney's impromptu farming in the habitat (or Hab) involves a lot of calculation starting with how much farmable "land" he'll need to create for the optimal yield. He calculates soil depth, water requirements (his and the soil), even how many potatoes he should put aside from the first harvest to act as "seed" for the next crop.

This is what I mean about minutia. to balance on the knife edge of survival, Watney has to calculate everything and considering his situation he finds himself having to improvise a lot too. If something breaks on Mars, there aren't any fix-it shops to help. That's not to say that is a dry book. In fact, there were moments where I laughed out loud. The beginning of the book is told through Watney's log entries and along with his cleverness, a sense of humor helps keep him going. And there were moments when I burst out laughing. Usually at little asides that helped diffuse the tension of listening to a man trying to stay alive a bit longer. 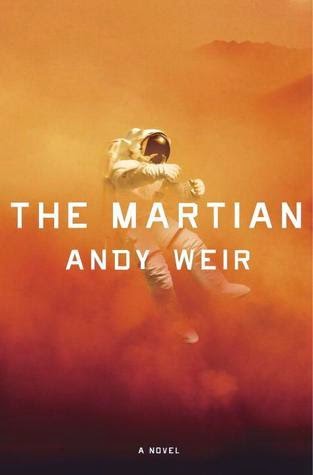 Later the narrative alternates between Watney's log entries and a mix of log entries and straight third person accounts from the folks at NASA trying to figure out how to rescue him once they discover (through probe photos of Mars) that Watney's still alive. It's not only the cost of such an expedition. The main question, considering long it takes to build these rockets, is, can one be sent up and reach him before his supplies run out?

This is where the talent of the reader, R.C. Bray, really shines as he takes on the personas of a myriad of characters involved in the rescue operation. Male, female, a variety of accents are all performed effortlessly and draw you further into the story, the fears and concerns of the characters matching that of the reader's.

Ultimately though it's the story of one man trying to survive against all odds that holds you. Mars throws a lot at Watney as he works on his plan to reach rescue and you can't help but wonder, "Has he at last met the problem he can't solve? The one that will finally destroy him?"

Take a listen and find out.
Posted by Laura L. Enright at 12:29 PM No comments: